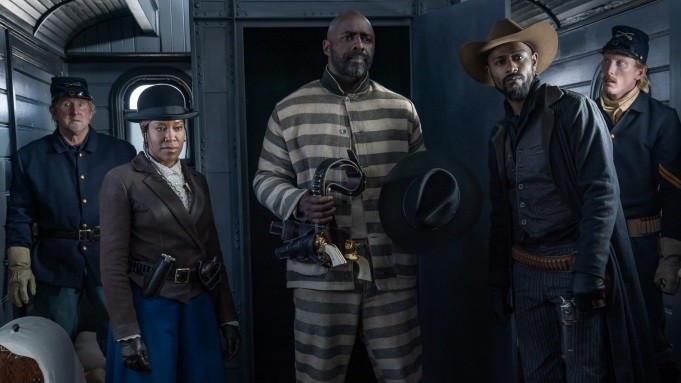 Where have all the Black cowboys gone? They are raging in the heart and mind of debut filmmaker Jeymes Samuel’s “The Harder They Fall,” an advantageous and stylistic western that could become one of the most popular flicks on Netflix and a populist selection in the major Oscar categories, which could include rapper Jay-Z.

Brutal, violent and cool as hell, the blood-squibb-western, which opened the BFI London Film Festival, is a genre piece that will likely lend itself to comparisons to filmmakers such as Quentin Tarantino, which is perfectly apt. However, one of the questions is how the Oscars will respond to this film that’s seemingly unfamiliar to what Academy members have traditionally seen in the genre. Netflix may be hoping for the Oscars to get really cool really fast, which they have shown inklings of in the past few years (“Black Panther” best picture nom). But the Oscars don’t always receive the memo.

While “Pulp Fiction” (1994), “Inglourious Basterds” (2008) and “Django Unchained” (2012) are often brought up as examples of the Academy’s acceptance of more gruesome, unconventional material, it’s never that simple. We tend to forget that “Reservoir Dogs,” both “Kill Bill” entries and mostly all of “The Hateful Eight” (2015) were ignored by AMPAS. Once again, Netflix has an abundance in the awards conversation this year — “The Power of the Dog” from Jane Campion, “The Lost Daughter” from Maggie Gyllenhaal, “Passing” from Rebecca Hall, “Tick, Tick…Boom!” from Lin-Manuel Miranda and “Don’t Look Up” from Adam McKay. Can Netflix perfect its Oscar juggling act?